According to the United States Environmental Protection Agency, bad indoor air quality because of the contaminants has been linked to a huge range of adverse health effects like respiratory diseases such as irritation, allergies, fatigue, asthma, etc.

However, if you’ve bought an air purifier and haven’t seen any positive outcome in the air quality inside the house, the odds are that you’re positioning it improperly. If air purifiers are positioned in inappropriate locations in the living area, their effectiveness can diminish by fifty percent.

Whereas, if you place air purifiers in the correct location, their efficiency can increase by twenty percent and improve the quality of life; hence, if you desire to know all the strategic and correct places to place the air purifier to achieve the most out of it, then keep on reading. We’ll be showing the 5 best places to put an air purifier in the living area. 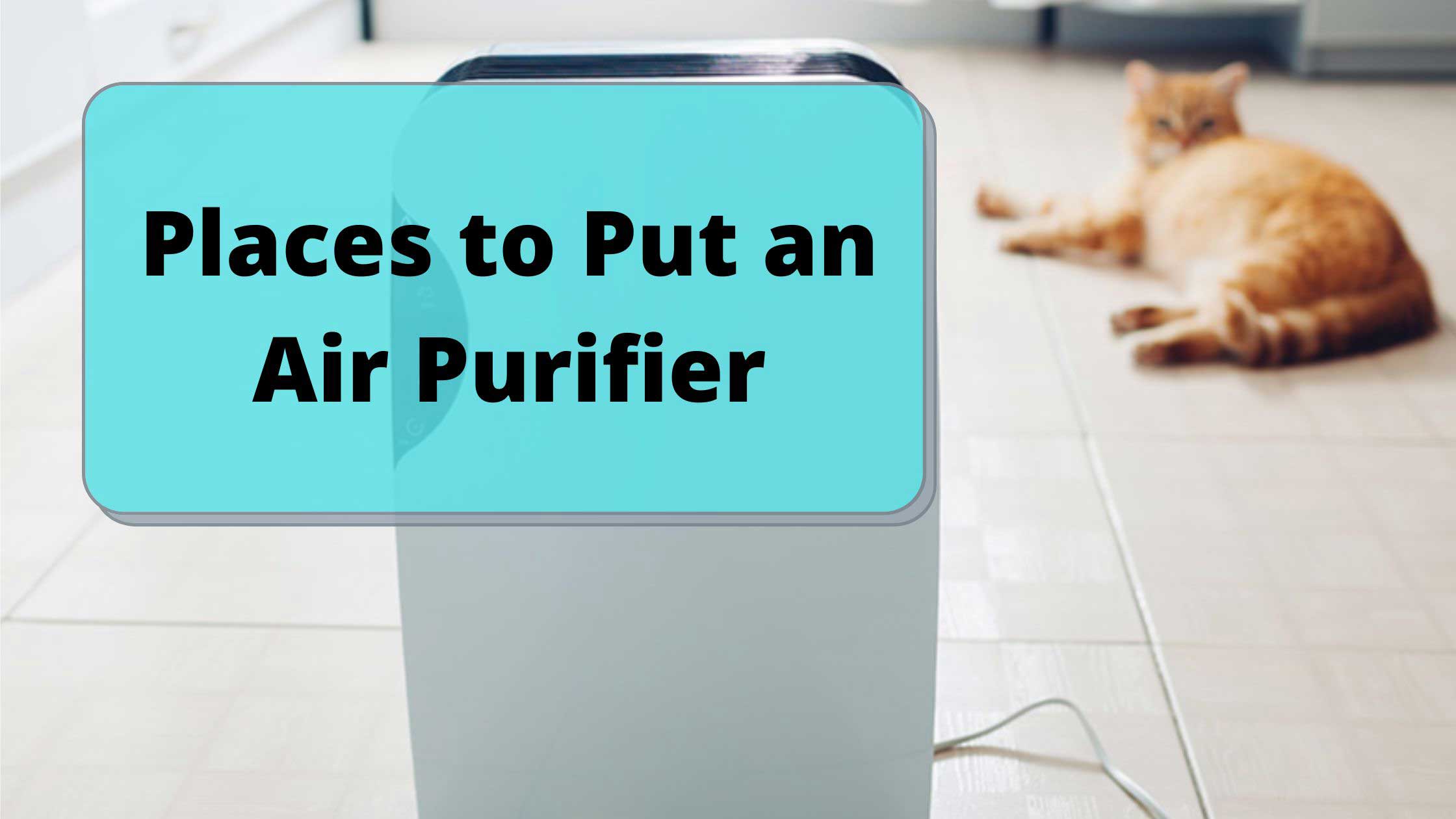 Putting the air purifier near the pollution source is a great option. The source can be air coming from outside, such as doors or windows. And it can be inside like mold-affected places or cooking smells from your kitchen. Let’s dive into more detail about where you ought to put the air purifier for getting the max performance.

Are you capable of identifying where the impurity source is actually coming from? If yes, that spot is the ideal place to position your air purifier. You can simply visually notice impurities like smoke wafting in the living area or mold growing in the bedroom.

Thus, it’s advised to keep the air purifier next to such pollution sources. The closer the air purifier is to the pollution, the more air particles it can filter and catch at a quicker rate, hence, stopping them from spreading in the whole living area.

Even for smells, if the home is contaminated with unpleasant, strong, or toxic odors, the air purifier ought to be kept near to where the smell is emanating from. If the pollutant or smell is coming from an external source outside the house, like secondhand smoke, put your air purifier next to where it’s entering into the living area; for instance, next to your bedroom window, door, or vent.

The air purifiers work great when they’re put in a space that receives max airflow. Thus, positioning it on walls, near windows, and next to the doorway can add to the efficiency of the air purifier.

In this way, the air purifier acts as a security guard for the bedroom, and near higher airflows is a great spot to place your air purifier. By capturing the pollutants where they’re the most congested, your air purifier filters them before they’ve got an opportunity to spread out.

The HEPA filter technology with carbon layers, which are integrated into the prime air purifiers, can get rid of 99.7 percent of airborne particles, mold, and dust, according to the EPA. Hence, when the air purifier is working, you need to ensure that it’s the only source of fresh air.

Open doors and windows can lower the effectiveness of the machine because of cross-contamination. Through such open sources, you are basically providing a free invite to external air pollutants and dust particles to enter and contaminate the home. Hence, the hard work of your air purifier will be of no use.

The airborne particles caused by contamination can spread anywhere. Hence, hazardous polluted particles can also hover around the ceiling through vertical indoor air circulation. To ensure that the whole surrounding, from top to bottom, is being cleaned, elevating your unit on a platform is a perfect spot for the air purifier.

You can simply put the air purifier on a piece of furniture like a side table, a dresser, or a slab in the living area. However, remember that the rule is that it ought to be anywhere between two to five feet high for filtering airborne pollutants.

By elevating the air purifier, you’re not just creating a cleansing balance in the space where all dimensions of the area are being cleaned but are also evading any tripping accidents caused by your air purifier. However, creating additional space on the furniture for the electronic device can be a hassle. Hence, to avoid that, you can instead invest in the air purifier that comes with a wall mount.

If you put your air purifier against the wall, it allows your machine to suck in as much air as possible; hence, resulting in a higher purified air amount to be released. However, the major mistake individuals make is putting the machine against the flat surface of the wall.

Also, moving the air purifier the cm away from the wall boosts its airflow rate to 100 percent. It ought to also be considered that each air purifier’s strength of airflow differs because of the square foot measurement of the area. Thus, to be on the safe side, the placement of your air purifier ought to be fifteen cm from the wall; by doing that, you can attain max optimization of the device, regardless of the capability and size.

Spots To Not Place The Air Purifier:

To further clarify what places are best suited for the air purifier, we’ve also analyzed all the spots you ought not to put the air purifier that could reduce its efficiency level.

Showcase the air purifier as the masterpiece it’s! Evade sticking the poor device in some closed spaces and cramped corners. If you do that, it’ll not work at max purifying efficiency. Closed spaces and corners are where air purifiers get the lowest airflow as they’ll be blocked off from more than a corner.

The only spot that’ll be getting any purified airflow will be that particular cramped, closed-off space. Thus, leaving the whole space polluted with dangerous particles. Similarly, it’s suggested to not put the air purifier below or behind furniture as such are also the low airflow positions; by doing that, your air purifier will not be capable of receiving air from the whole room for filtering it.

An air purifier and humidity don’t mix well together. The cause for that is that humidity causes much strain on the air purifier. Since the dampness in the air makes the air get heavier, it pushes the filters of an air purifier to exert more force to cleanse the air.

Thus, it’s suggested not to put the air purifier in high-moisture spaces like the bathroom where there’s constant steam. Furthermore, even your kitchen isn’t a suitable place to position the air purifier as it’s a similar atmosphere as your bathroom.

How Frequently To Change The Air Purifier Filter?

Changing the air purifier filter is essential for maintaining the effectiveness of your air purifier. If you do not change its filter, it’ll decrease the airflow through an air purifier. The lower airflow denotes that it’ll take much longer for an air purifier to remove particles from the room’s air.

The majority of air purifiers come with HEPA filters that have to be replaced. These filters are almost always disposable, so reusing them isn’t an option. That’s because the HEPA filters come with a micro-fine mesh weaving that’s simply damaged.

It’s significant because HEPA filters tend to be costly to replace, so extending their lifespan saves cash in the long run. The majority of air purifiers have their own integrated pre-filters. So you would not require an additional pre-filter.

Every air purifier has a coverage area on the specifications. Make sure to go through it before buying and compare it to how big the home is.

Can You Move The Air Purifier From One Space To Another?

The majority of air purifiers are easily portable. You can move them from one space to the other depending on the requirements. Should you locate that the purifier is heavy, you can put it in the space with the most pollution.

Hathaspace Air Purifier Is Beeping: What It Means And How To Fix It?

How To Properly Clean A Levoit Core Air Purifier?

How To Reset A GermGuardian Air Purifier? 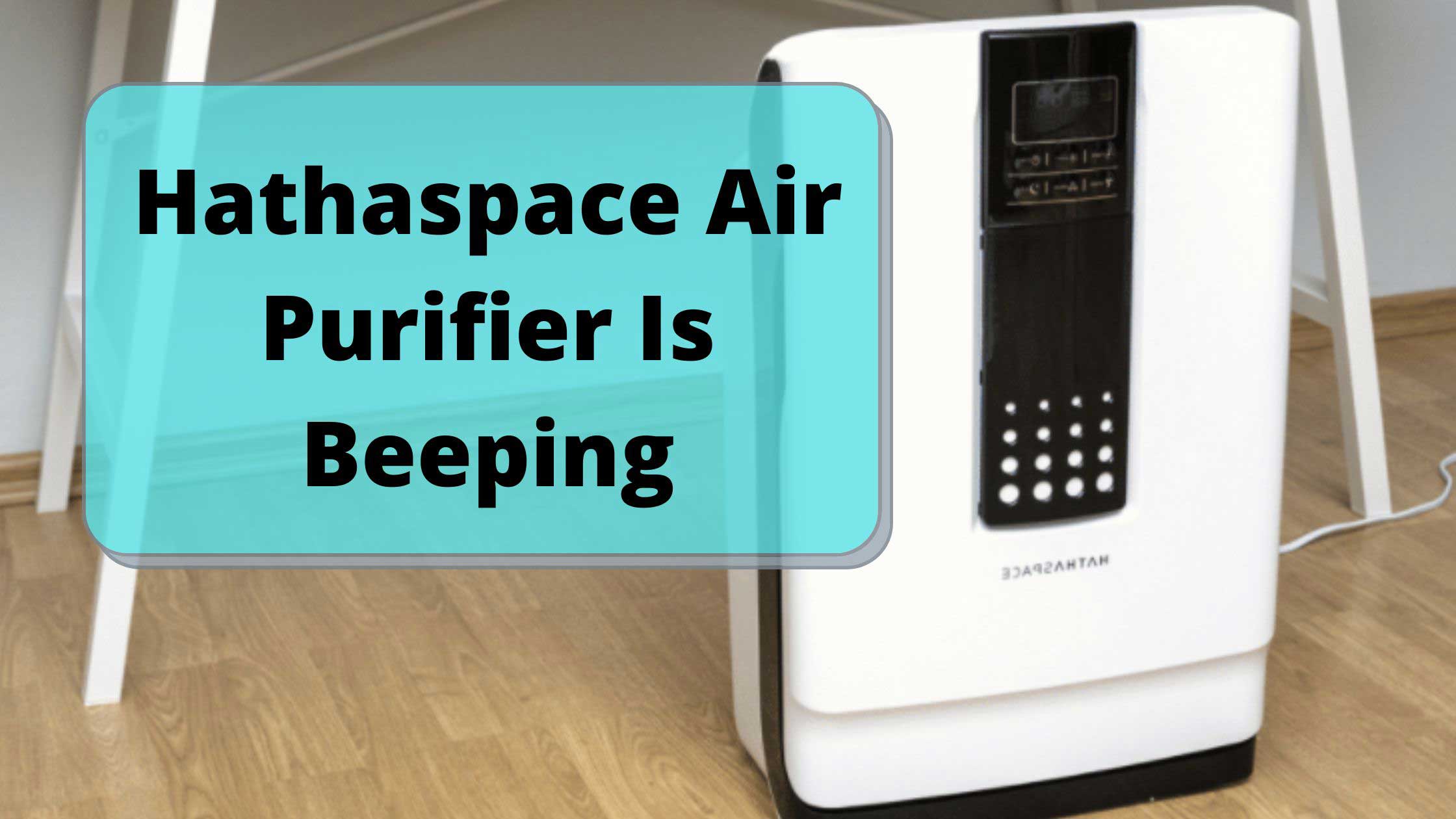 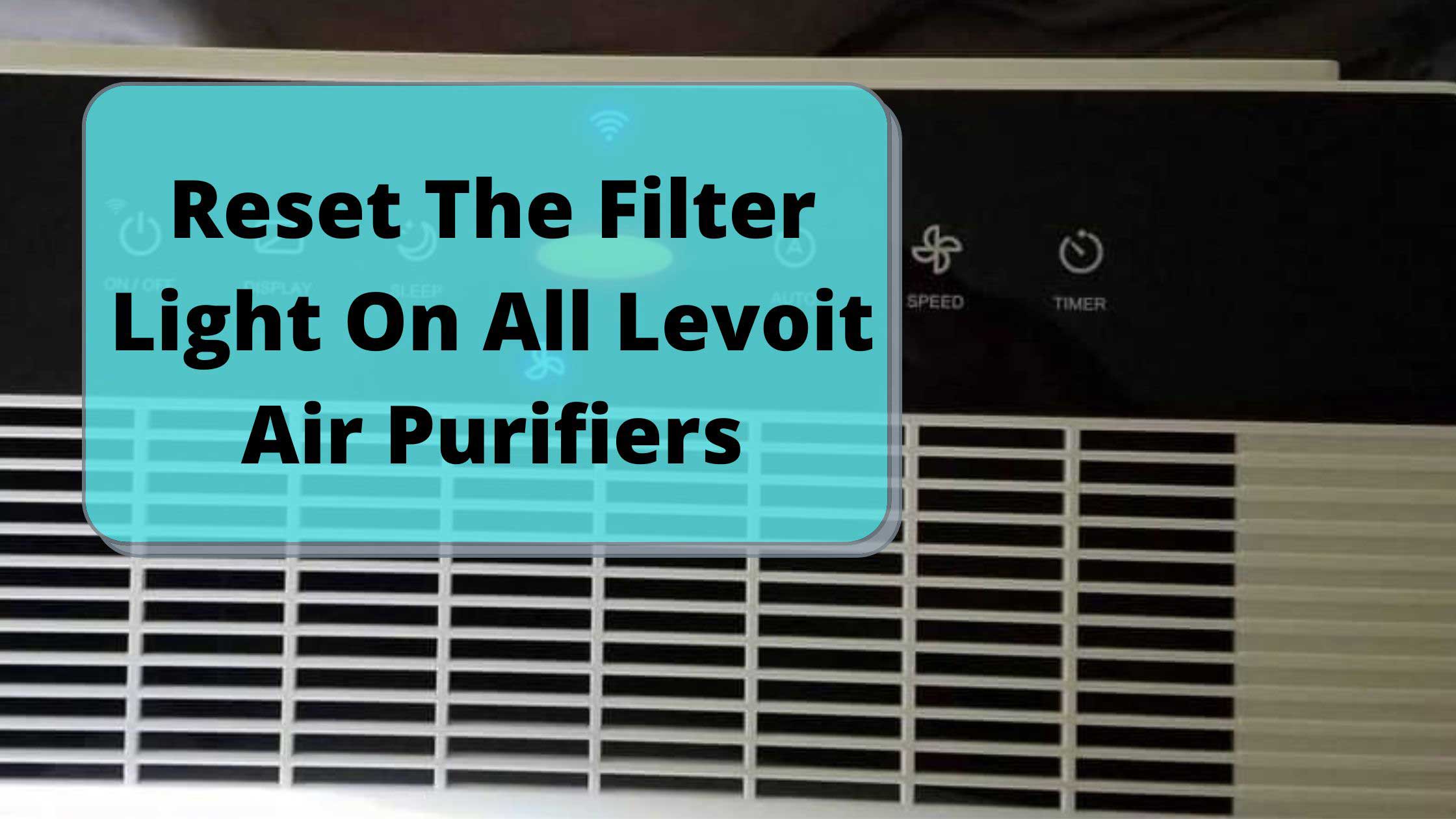 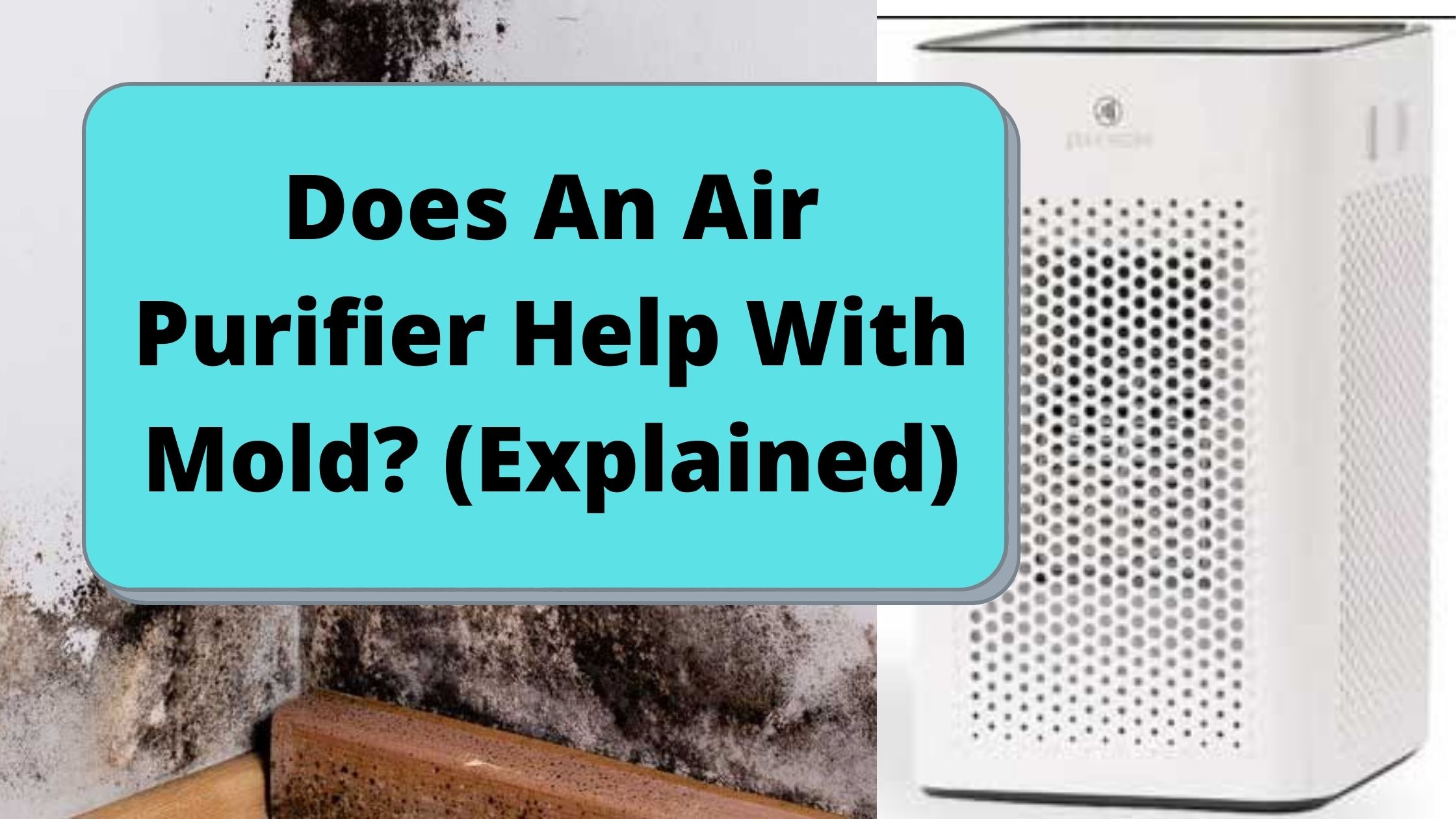